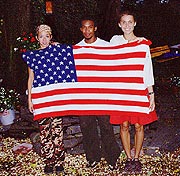 Ha-Chi-Yu, Jason Jordon and Naima Davis, New York City residents and members of Team Bravo, hold the American Flag Throw. Team Bravo was part of a group of local volunteers who assisted the NYFD and NYPD at Ground Zero during the first three days after the collapse of the Twin Towers. They have started a project, "Stitches for Peace," to benefit the American Red Cross. For more information visit the Bond-American Website.

We've all searched the stores for American flags but to no avail. But there's plenty of red, white and blue yarn in the stores and you have your Sweater Machine, so knit a flag. The 13 stripes and blue background for the stars are done in stripes and intarsia respectively. The stars are duplicate-stitched after the flag has been knitted. This pattern includes two options for finishing: a hem (or casing) on both top and bottom (through which you can also insert dowels to hang your flag) with a backwards crochet at the ends. Or you can work a backward crocheted edge around all sides (in either gold or the flag colors).

Note that this pattern requires having two Sweater Machine beds bolted together since you will need 192 needles.

Remember that you are knitting mirror image, so the blue background will be on your right as you knit. Start your knitting on the left so the cut ends from the stripes are on the LHS so the yarn ends will be at the left edge rather than abutting the blue section. Option A gives instructions for the stars in the blue section to be knitted in using the Fair Isle or intarsia technique. (Remember to catch in the long floats between the stars if you are using Fair Isle.) Option B gives instructions for the stars to be duplicate-stitched after the throw has been knitted.

>FINISHING
Steam or wash the throw.
Option #1: Hem or casing: