From the Heart Knitted Stocking 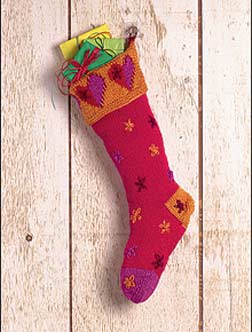 TAKE TIME TO CHECK YOUR GAUGE.

1) When changing colors, twist yarn on WS to prevent holes. 2) Wind A, B and C onto bobbins and work each heart motif and background color with separate bobbins.

Beg at bottom edge, with straight needles and A, cast on 68 sts. Work in garter st for 6 rows.

With dpn and D, cast on 3 sts. Work I-cord as foll: *Next row (RS) With 2nd dpn, k3, do not turn. Slide sts back to beg of needle to work next row from RS; rep from * until Icord measures 2="/6.5cm from beg. Cut yarn leaving a long tail. Thread tail into tapestry needle, then weave needle through sts; fasten off. Sew to inside back edge.